Carnage in the Iron Kingdoms

Commander Coleman Stryker raised his binoculars and surveyed the landscape. His battered and beaten Warjacks clinked as they cooled from the forced march over treacherous terrain. Stryker spied his objective; about 20 feet from the warp gate he must capture, a large band of Khador snipers huddled behind a thick stone wall, their weapons trained on the gate. Behind them, two massive and shiny new Warjacks hummed and flexed their pistons.

Stryker looked over his shoulder at his tattered, grimy ‘Jacks, upon whose crumbling weaponry the fate of the entire Cygnar race depended. One had a wonky arm where the superglue had failed to set, another was painted in an amateur manner, a third had trodden in dog-poo.

“We are fucked” he said.

So began the Privateer Press official tournament at Wigan Wargames and as luck would have it, I got paired off in my first game against the “ringer”, a nice bloke who we shall call “Ste”, because that is his name, who hadn’t previously attended the club with his shiny, extremely well painted Khador monsters (he has since attended though, so we’ll let him off).

Immediately he raced over to the table, surveyed the terrain and chose a defensible position behind a wall with his snipers. It’s only a game I said to myself in my head as I looked over the expanse of open terrain on which I was about to get my arse shot clean off.

You know when you get that sinking feeling and you just want to get things over with? Well Stryker had that. He rushed into the trees and took a couple of pot-shots at Kommander Sorscha, missing wildly but frazzling a couple of snipers. Sorscha immediately popped her feat, freezing the Cygnar in place and vaulted over the wall. She strode up to Stryker, who had a moment to think: Hmmmm, she’s a bit tasty, before she chopped him into insignificant fragments.

We had an hour to play this scenario, and I’d lasted seven minutes. Warcaster dead. 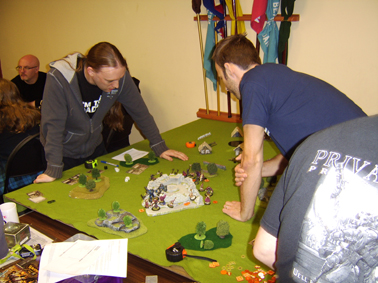 WHAT?? Who is this impostor? He must be destroyed!!

Martin’s Cygnar had been blasted to smithereens in his first game so this was potentially the wooden spoon game and we lined up defending one flag and trying to capture our opponent’s.

Characterised by Ironclad ‘Tremor’ special attacks and Strykers ‘Earthquake’ spell, this battle saw most of the combatants on their arses more often than not. I obtained a ‘point’ when I captured Martin’s flag by blasting the heads off every single one of his foot soldiers in a fine grey spray of brain-mist as they huddled around the flag like maggots round a tramp’s ringpiece.

So that was that. I finished the game comprehensively by filling the fake Coleman Stryker with so much lead he developed his own gravitational field and set myself up for a grandstand, top-three-finish finále.


OK, so I wasn’t going to finish top, but Stryker was confident he could easily wipe out Alex’s mercenary scum in the final battle to finish in a respectable position. Things didn’t exactly go to plan however with my Ironclad being overrun early on and the Cygnar warjacks fighting for their rusty lives. The idea of the last scenario was for the Warcaster to always remain within a preset boundary, which meant Stryker had to advance into battle without the nebulous protection of grunts his opposite number was enjoying.

The battle ebbed, and ebbed a bit more with the Cygnar being pressed back. The casualties of the battle meant that sadly the mighty Cygnar had lost but at least Stryker was still alive.

“2 minutes to go” said Barry. I didn’t want Alex to have another go so I went through my turn leisurely.

“17 seconds” said Barry. I passed the turn to Alex thinking that the game was over, but unbeknownst to me he’d been working out exactly what he needed to do to win outright: “OK” he began, “this ‘jack walks over here, he needs to roll 14 on three dice to throw Stryker” he rolled the dice and his Warjack picked up Stryker by the head and threw him clean over a building and out of the boundary, probably ripping his head off in the process.

There was much merriment until Barry pointed out that line of sight was required to the target, so Alex threw him over a hedge instead. Then Barry pointed out Stryker would scatter, and joy of joy, he landed well within the boundary, on his feet, without a scratch on him.

In your face, filthy merc’ plebeians.

Many thanks to Barry for organising this, and as a volunteer for Privateer Press he had a prize for Chas: some funky scatter templates. Well played Chas. 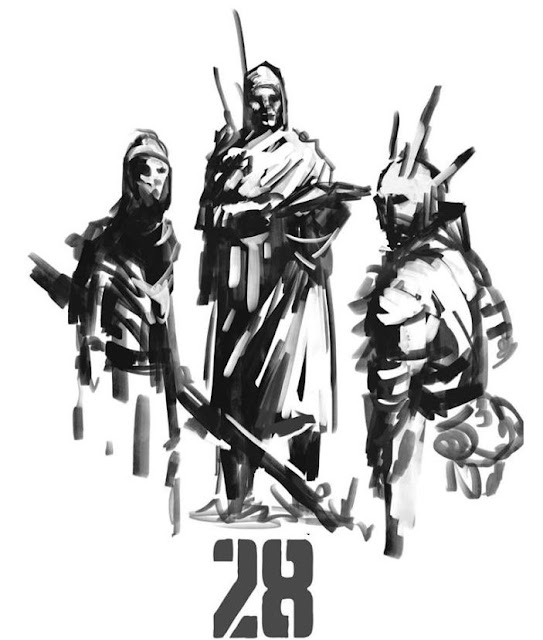 The dudes at 28Magazine are giving away some old Warhammer minis. Which is a great thing to do in these grim(dark) times.

All you have to do is email them before the end of June 2020 and you'll be entered into a draw.

For more details CLICK HERE
Posted by VALIS at 1:18 AM No comments:

In which my chaps give Paul's losers a damned good thrashing.

“Have you no morals?” shouted Grunt #1

“Oh” said Grunt #1, scratching his groin thoughtfully. “Why don’t we have proper names?”

“Because our life expectancy is about five minutes” said Grunt #2, “what’s the point in giving us names?”

“You’re not filling me with confidence”

“What’s the alternative?” said Grunt #2, “a short life of drudgery, scrabbling about in the muck trying not to die of starvation”

“But I have dreams” said Grunt #1, “a bucket list, if you will, of aspirations”

“What’s the point?” said Grunt #2, “when the sun expands and swallows the Earth, all human endeavour will be rendered pointless”.

Grunt #1 did some more thoughtful scratching. “When you put it like that.....” he said.

And so it was, that our two heroes followed Peado Bob and his ‘friend’ Schoolboy Jimmy, into some dank ruins to retrieve some treasure and other stuff. Something about undead. Or maybe it was Kobolds. I wasn’t paying attention.

“You go that way” instructed Bob, “me and Jimmy are going this way”.

“You’re going by yourselves?” said Grunt #1, a hint of incredulity in his voice, “but it’s dark! And forbidding! Yet quite cosy-looking and romantic.”

Grunt #1 and Grunt #2 forged ahead, and found a thing. They pressed some buttons and Grunt #1 turned into a fire-breathing dragon cyborg.

“Whoooo!” I shouted, “Andy! What does this mean? He’s changed into a fire-breathing dragon cyborg! What benefits does it get him?”

“It gets you some experience points” said Andy

“That’s it” intoned Andy, in his loathsome Scottish burr. 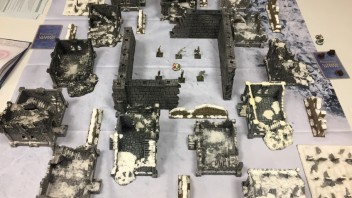 At this point, Paedo Bob’s warband went berserk and starting attacking everything; Bob teleported one of Paul’s unfortunate warband into the midst of my own, just so we could give him the kicking of a lifetime.

“Why are you fighting?” shouted Andy, “it’s all about experience points”

Bryan glowered as he dabbed some more brown on a pig farmer.

Just then, some undead thingy bummed Schoolboy Jimmy into oblivion.

“Noooooooooooooo!!!” cried out Bob in dismay, “it should have been me!”

Then some other stuff happened, Paul rolled his dice and all his dead chaps came back to life.

So, when the world opens again, I have this grand plan of re-enacting the Heresy at my local club, and with this in mind I am trying to create 1,500pt forces with a little bit of flavour. I'm limited by the minis I have and also the loyal forces at The Siege of Terra (the Grand Finale).

So anyway, I started with the White Scars, one of the three loyal chapters:

The Hit & Run rules from Firepower #2 lend them a degree of flavour. Hopefully enough to distinguish them from the other chapters.

I've also started to paint them up: 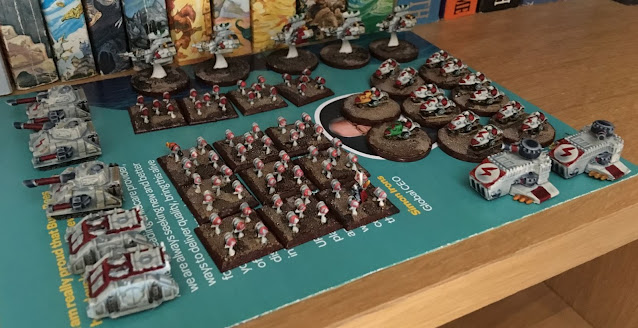 In The Shadow of the Pierats

“What is this wretched hellhole of effluent and scum?” seethed Majnun, Pierats team captain and all-round super-thrower, as the team coach pulled into deepest Blackburn. Some local two-headed ladies, inebriated almost to the point of oblivion, tore off their soiled undergarments in a lustful frenzy and threw them at the coach as it drew near. They stuck to the side of the team transport with a wet slopping noise and a smell of manure. Majnun was sick in his mouth. 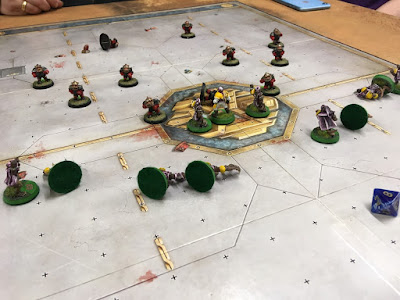 “Let’s get this game won and get out of this sticky jizzrag of a town before I lose my temper!” he roared as the team disembarked and piled into the Shuffle’s stadium, raking their claws along the freshly-painted corridors as they raced through the stadium underbelly and onto the pitch.
Just 13,000 spectators had bothered to turn out for the opening game of the season, with 4,000 Pierats fans making a din in the cramped away end. Electing to kick seemed to enrage the home fans; a double 6 on the kick off with a FAME of +2 for the dwarfs saw most of the rats getting their heads kicked in from the resulting pitch invasion. 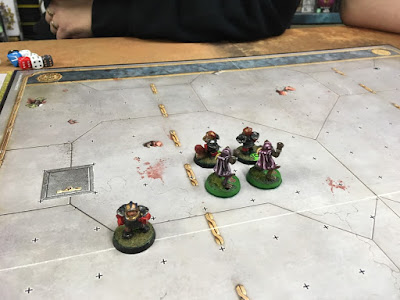 Fortunately, short dwarven legs can’t get a wriggle on when required, especially when their ball carrier is being hunted by a couple of determined gutters, and the rats were all stood up again at the beginning of the dwarfs 3rd turn, admittedly brawling in close quarters and getting their furry rat noses squished for their troubles. 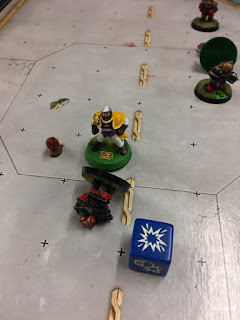 Slowly but surely the dwarves removed the Pierats from the pitch and advanced inexorably towards the first score of the game, but miraculously, as the dwarven runner stretched his little legs and made a break for it, Nicodemus (he’s a rat, honest), came out of nowhere and flattened the poor little blighter.
He scooped up the ball, and with time running out in the first half, made some space for himself and launched a pass forward to a waiting gutter.... only for a dwarven safety to pull off an amazing interception, leaving the scores tied 0-0 at half time. 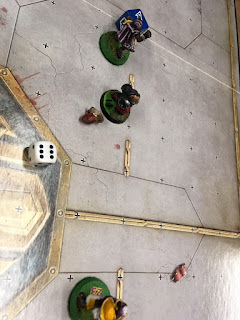 After the halftime oranges failed to revive the sleeping Pierats, the remainder decided to go on the offensive and try and score quickly, then hope the shortlegs wouldn’t have the manoeuvring capabilities to outflank the rapidly diminishing rat numbers.

Working the ball out to the right, Majnun, Pierats team captain and all-round super-thrower, rocketed a pass into the waiting claws of Raga, who scampered away from the despairing clutches of the shorties for the opening score of the game.
1-0!!
Credit goes to my opponent here for not punching me in the face as I did my touchdown dance.
Now it was all hands to the pump on defence as the dwarven baddies hammered our heroic rats into a verminous paste in the name of vengeance. 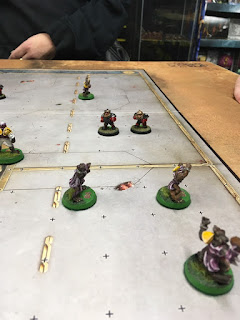 Again the dwarves advanced down their right flank, and the remaining rats did a sterling job of tying them up until, with time running out, the Shuffle had no option but to make a break for the end zone, gifting Majnun, Pierats team captain and all-round super-thrower the opportunity to blitz the stunties’ little square head off.

That was the cue for a scrum around the ball, but there wasn’t time for the dwarfs to despatch the rats and scoop up the ball before the ref blew for full time.
Final Score: Zhuffbar Shuffle 0-1 Lancashire Pierats
Attendance: 13,000
MVP: Damug (Pierats)
Posted by VALIS at 6:28 AM No comments: